HOW TO LAUNCH SPI WITH YOUR CHURCH OR GROUP

There are a number of ways to implement SPI.  It can be done church-wide, with a sub-group of your church, within existing small groups, or as a grassroots launch.

As a starter, we always recommend that you begin with one of SPI’s two diagnostic surveys.  If you are launching church-wide the (completely anonymous) survey needs to be filled out during the Sunday morning service.  Since SPI’s mission is targeted at the average American Christian, having information on the “whole” congregation is extremely important, so it must be gathered Sunday morning.  Doing one of these surveys on a Sunday morning is viewed as an act of worship; the reason it is regarded as worship is that with a relatively short amount of time (it takes just eight (8) minutes for the people to fill it out) we can better equip a group of believers to have a deeper relationship with Christ and to be more effective for His kingdom.

In some of the survey questions there are overlaps and/or trends that exist with most churches; however, in other areas addressed by the surveys, different congregations can and do have significant differences from each other.  Consequently, for the purposes of moving your congregation or group forward, your peoples’ actual responses, views, and current practices, are the ones that really matter.  People are more easily moved by information that comes directly from them, concerning themselves, versus various national averages, which may or may not be perceived to reflect the thoughts or actions of their local congregation, or of themselves.  Once the survey results are in hand, your leaders will be in a much better position to decide if they want to move forward with SPI, and what type of implementation approach they feel would be best for your church or group.

A church-wide launch can be done as a hard launch or a soft launch.  A hard launch is when the church uses its local survey results to make a presentation to the entire congregation, encouraging them to sign up to be part of a PrayerCord (or turn their already existing small group into a SPI Small Group).  Depending on a number of variables, you should expect between 25% and 50% of the congregation to sign up the day of the presentation.  Even though the entry level for the PrayerCordsTM is a pretty low bar, most of those signing on will not actually get their Cord formed and operating, unless the church is committed to helping them to get started; in some ways this is like starting a mini-small group ministry, where one didn’t exist before.  Those who sign up to be in a PrayerCord will be committing to the following:

A softer launch approach would consist of presenting the PrayerCords to the congregation as an available tool, versus striving to persuade them to sign up the day of the presentation.  Other softer approaches are also possible, such as working with an Adult Bible Fellowship, a youth group, small groups, Life Groups, or a Sunday school class to get started with, instead of the entire congregation.  However, when SPI is launched with a congregation or reasonably large group (say 20 to 50) those leading the effort are strongly advised to use the QuickCheck CardTM for Group Assessment.  This tool has been designed to work in tandem with the PrayerCords System.  The QuickCheck Card has been successfully used, with other tools, to double the number of individuals reporting a “Good Prayer Life” in just four months.  If you or some of the people at your church want to launch SPI with the church, it is imperative that the Senior Pastor is totally behind it.  If this is not the case, it will be substantially more difficult to be effective on a group or congregational level.

Nevertheless, if your church is not interested in formally launching SPI you still have the option of moving forward with a Grassroots Launch, which sometimes is preferable to a group or a churchwide launch.  The survey data has convinced us that the prayer life of the average American Christian is a sleeping giant in the American church.  Do consider being part of awakening this giant.  Whatever approach is ultimately decided upon, there is no substitute for actually getting started.  The needs at this time in history are very great, but the power of the fervent righteous prayers of God’s people is also very great… 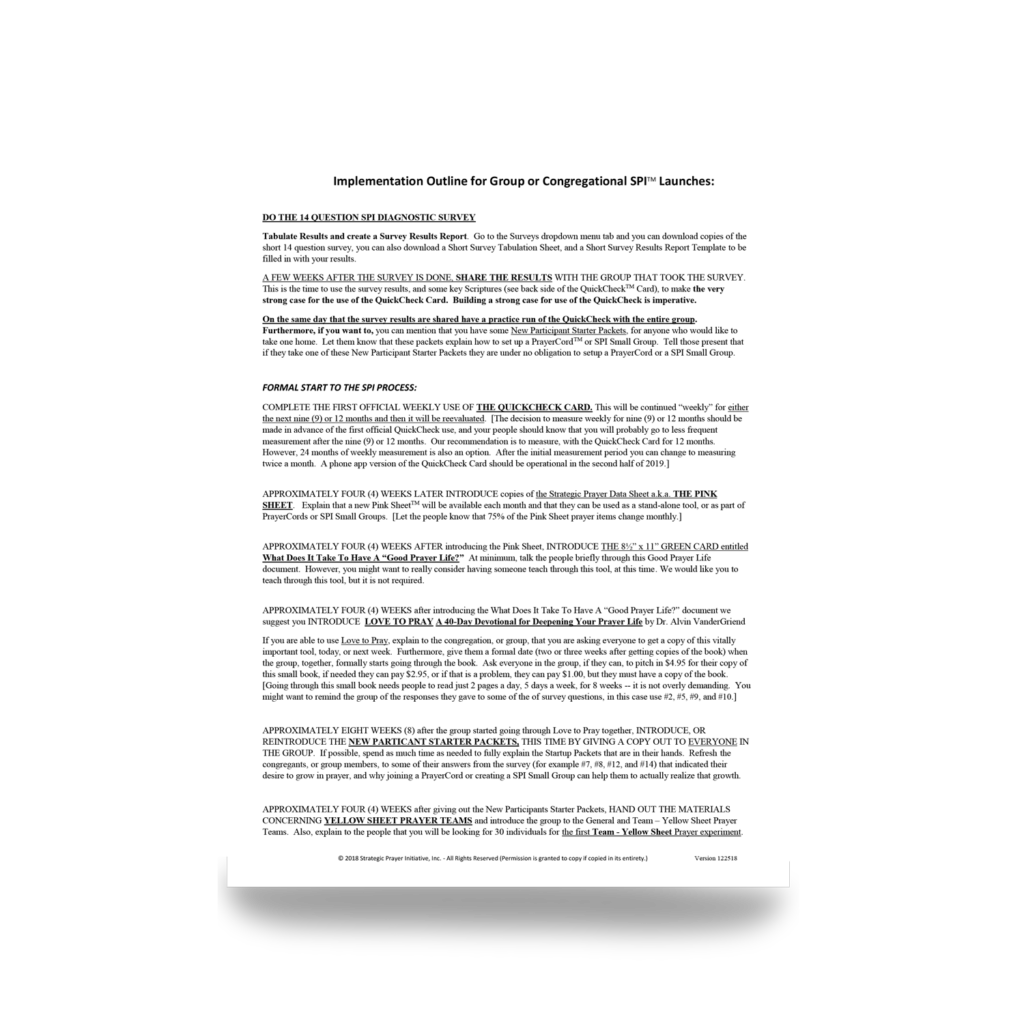 Of the following four downloads, the “SPI Full” launch document is by far the most demanding.  However, you choose to totally follow the full launch recommendations, you should be able to see the number of people in your congregation who have a good prayer life double within the first four (4) to eight (8) months of the process.  This is the type of growth that has eluded 95% of all American churches. On page 4, two years of an actual church’s Full Launch QuickCheck Card data is listed.  As you can see, a full launch can have some very dramatic positive results over time, especially so for those taking part in a PrayerCord, and it’s easy to accomplish three (3) minute-a-day time commitment!

Nevertheless, the document labeled “A La Carte” is the one we suggest you click on.   The first page of this document is an Executive Summary laying out the basics of Approach A, which is by far the easiest launch approach.  Information concerning Approaches A, B, and C make up most of the document, and at the end of this A La Carte document there is a single page outline going over the first year (or 1st Phase) of one comprehensive implementation approach, yet one that has less expectations than a Full Launch.  This one-page outline is helpful if you are thinking big.  Yet, we would rather most of you use the much simpler Approach A, then did nothing, due to thinking the longer implementation approaches (no matter how successful) are too demanding, or too complicated.